(Note - The links provided do not imply any endorsement nor commitment by the US Government, the Department of Defense, ARDEC or any of the tenant organizations at Picatinny Arsenal)

Picatinny Arsenal is the Joint Center of Excellence for Guns and Ammunition, providing products and services to all branches of the U.S. military. Nestled in the northern New Jersey Highlands, our team of more than 6,000 personnel includes Soldiers, Sailors, Airmen, Marines, U.S. Federal employees and contractor personnel who lead in the research, development, acquisition and lifecycle management of advanced conventional weapon systems and ammunition. Picatinny's portfolio comprises nearly 90 percent of the Army's lethality and all conventional ammunition for joint warfighters.

Links on this page is for the greater Picatinny Community to include current Picatinny employees, retired and former employees, active, reserve, and retired military, and partnered communities surrounding Picatinny Arsenal (Morris County). This section highlights our leisure activities and events that might be of interest to you.

Picatinny Arsenal in World War I
by Patrick Owen

Picatinny Arsenal’s importance to the Allied war effort predated America’s official entry into the conflict. Suppliers of war materiel felt the impact of World War I before this country became a belligerent.  Picatinny Arsenal in northern Morris County added a second shift in late 1914. Despite the increased worked load, the workforce fluctuated up and down in the 370-450 range until the country’s declaration of war in April 1917 propelled it to 1,300 and then to 2,167 in 1918. Setting a pattern for later conflicts, the figure fell to 509 after a mass layoff on 1 July 1919.

Before World War I, seven plants in the United States made propellant powders, five of them in New Jersey.  The five were DuPont’s three works in Carney’s Point, Haskell, and Parlin, a Hercules plant in Kenvil, and the Army Powder Factory at Picatinny. 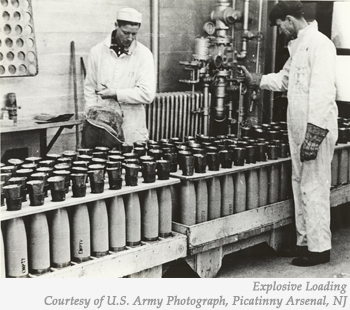 the Picatinny factory accounted for only 0.01% of the nation’s total powder needs.  Its most vital contribution was helping older plants increase their output and aiding new plants in beginning production. Both men and women inspected plants and aided production within the state at Carneys Point and Parlin, in addition to locations in Pennsylvania and Virginia.

Other work included loading explosive D into armor piercing rounds, adding TNT to high explosive shells, bombs, and grenades, and mixing TNT with ammonium nitrate to make amatol, a wartime adaptation to cope with the heavy demand for TNT.  The powder factory’s laboratory expanded its mission from quality control to studying problems encountered in developing new powders, explosives, projectiles, and fuzes plus inspecting oils, paints, cartridge, cloth, and other ammunition-related items.  The arsenal also provided a camp ground for the 42nd Infantry as it mobilized to go overseas and for the 14th and 16th Coast Defense companies assigned to Sandy Hook Proving Ground. 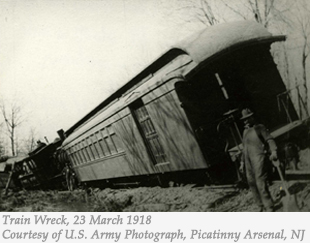 Employees worked ten hours a day, six days a week, not including travel to and from work.  Many walked due to poor train service.  The few with automobiles drove on unimproved, ice covered, rutted roads. Train travel had its dangers with a major wreck on 23 March 1918.  In that incident, the homeward-bound employees survived, but the train’s fireman did not. Employees also ran risks on base.  On 6 June 1918, a fire burned an employee’s arm but he stayed on the job with no lost time.

World War I brought more women into Picatinny’s ranks.  The swelling employee figures not only augmented numbers in areas already heavily female – the powder-bag sewing room and clerical positions – but also brought four women into laboratory work as powder testers plus one female chemist.  Despite talk of keeping these women postwar, there is no evidence of them remaining at Picatinny after the Armistice.

World War I brought other benefits to Picatinny. The military installation increased its land space by 56 acres and constructed 54 new buildings. One of these new buildings was a garage, signaling Picatinny’s move into the machine age.  In addition, the war brought the arsenal its first motorized trucks, at the cost of losing a stately oak in what became a heavily-trafficked intersection.

Some missions, such as powder making, dwarfed others in size and expenditure, but it was the ability to fill a number of needs which made Picatinny a significant contributor to the Allied victory.

Patrick J. Owens received his PhD in United States History from the University of Notre Dame and has been an U.S. Army civilian historian at Picatinny Arsenal since 1988.